“He (Philip Larkin) had struck up the friendship with Conquest in 1955. The connection came about through Conquest’s editorship of the New Lines anthology; the friendship blossomed on a shared interest in what Thwaite describes as ‘illustrated magazines for men’ and Larkin more bluntly called ‘sex, in printed or photocopy form’. Chaperoned by Conquest, Larkin toured the porn shops of Soho, looking for pictures of schoolgirls being caned. ‘Bamboo and Frolic are the tops, or rather the bottoms . . .’; ‘MINUIT CINQ has some good rears in it now and again . . .’, ‘Yes, I got the pictures – whacks. I admired the painstaking realism of it – I mean, the teacher really did look like a teacher, and I greatly appreciated the school-like electric bell on the wall.’ When Thwaite says that this kind of thing is Larkin’s ‘bawdy’, the red-blooded Falstaff-&-Mistress-Quickly word does less than justice to the desolate giggliness of the letters to Conquest and the way they conjure, with horrid poignancy, the emptied bottle and the lonely room.” 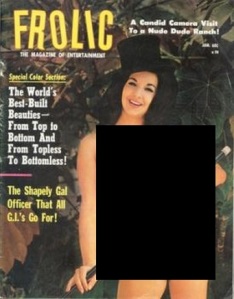 “In the post-Stalin period much changed, but the party remained inviolable. Khrushchev’s attempt to relax the party’s tight hold on everyone and everything by granting a larger role to the government apparatus cost him the post of general secretary of the party.

During Perestroika a policy was adopted of fundamentally reorganizing party activity, democratizing it internally, and later changing its very role in society.

…The fact is that the CPSU began the reforms when leaders who were adherents of reform were in its leadership. Moreover, those changes would not have begun at all if the initiative for them had not come from the CPSU…[thus, resulting in the formation of] the reform group at the head of the party.”

“The new and startlingly different picture of Diego Rivera is revealed in US State Department and FBI documents uncovered by Professor William Chase, of Pittsburgh University, Pennsylvania, and his assistant, Dana Reed, during their researches on Trotsky. The Mexican political and cultural establishment has been stunned by this weeks publication of the references by a journalist, Rossana Fuentes-Berain, in Mexico’s business daily El Financiero …

When the exiled Trotsky was roaming Europe, unable to persuade many countries to let him in, Rivera used his contacts to get him into Mexico in 1937 …

All this material leaves no doubt that Rivera was passing information to the Americans. Whether or not that information was accurate and several diplomats pointed out the painter’s tendency towards exaggeration is another question. True or not, it was all music to the ears of the FBI chief, J Edgar Hoover …

The revelations about Rivera are surprising enough, but Chase and Reed are promising to shatter some much bigger illusions. Reed told the Independent the two academics had also uncovered some very damaging stuff about Trotsky. We’re still trying to get hold of some FBI stuff on him . . . in fact, I can tell you we have concrete information that Leon Trotsky, too, was an informant of the US government.

Source: The Report of Phil Davison published in “The Independent” on November 25th, 1993. 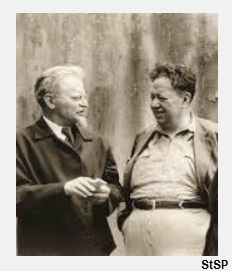 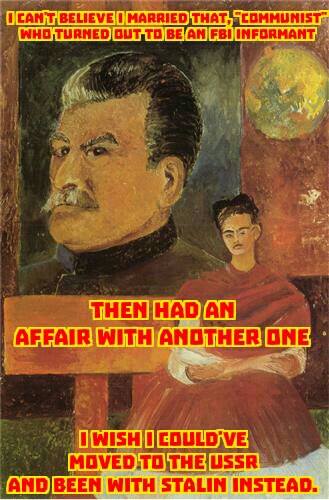 “Stalin has been widely attacked by political adversaries, Russian and foreign, as a cruel and heartless man, but in point of fact he was remarkably long-suffering in his treatment of the various oppositions. This statement may sound surprising, but it is true, as the record shows. The Kremlin’s struggle with Oppositionists began before Lenin s death, and again and again one or another of the Opposition leaders admitted his faults and beat his breast and cried “Mea maxima culpa,” and the Kremlin forgave him. I say this is all on record, whatever the Trotskyists may claim.” 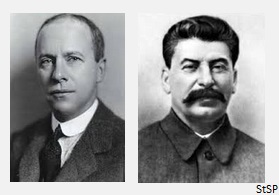 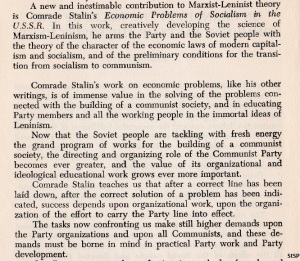 Source: N. Khrushchev (1952), “On Changes in the Rules of the CPSU”, Report to XIX Congress. New Century Publishers, New York.

” …the victory of socialism in one country does not at one stroke eliminate all war in general. On the contrary, it presupposes wars. The development of capitalism proceeds extremely unevenly in different countries. It cannot be otherwise under commodity production. From this it follows irrefutably that socialism cannot achieve victory simultaneously in all countries. It will achieve victory first in one or several countries, while the others will for some time remain bourgeois or pre-bourgeois. This is bound to create not only friction, but a direct attempt on the part of the bourgeoisie of other countries to crush the socialist state’s victorious proletariat. In such cases a war on our part would be a legitimate and just war. It would be a war for socialism, for the liberation of other nations from the bourgeoisie. Engels was perfectly right when, in his letter to Kautsky of September 12, 1882, he clearly stated that it was possible for already victorious socialism to wage “defensive wars”. ” 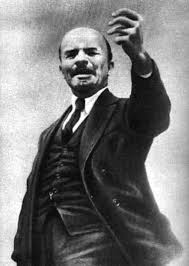 “In Lenin I honor a man, who in total sacrifice of his own person has committed his entire energy to realizing social justice. I do not find his methods advisable. One thing is certain, however: men like him are the guardians and renewers [Erneuerer] of mankind’s conscience.” 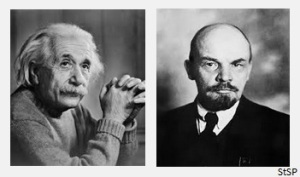 “I was accompanying the Cuban delegation led by Defense Minister Raul Castro…The whole delegation was in a good mood when we were returning from Litomerice. I was in a car with Raul Castro and Luis Martino. During the ride, we exchanged opinions on some international and party issues…they said they made their own assessment of J.V. Stalin’s work because he was a great fighter against imperialism. I told them that the CPSU, cde. Khrushchev or our party never said that imperialism would be any different than before, or that it was not necessary to fight against it. I emphasized that we fully support the position of the CPSU and the Moscow Declaration.”

Source: Documents Regarding Cuban Defense Minister Raúl Castro’s Visit to Czechoslovakia, June-July 1960 as published by the Wilson Centre, US in Fall 2012. 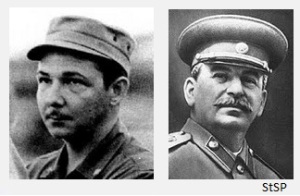 “Stalin is mischievously and dangerously underrated by us. At present we are either reviling him as a bloodstained monster whose sole occupation and delight is the shooting of his political opponents, or assuming that his diplomacy, like that of our own Foreign Office, is concerned solely with the ambitions, rivalries and cupidities of the seventeenth and eighteenth century dynasties…

… I am acutely aware of the risk of praising a statesman before he is dead; but the extent to which we are duping and doping ourselves by reckless abuse of Stalin … is too dangerous to be let pass.”

Source: A Letter of Bernard Shaw appeared in New Statesman on May 31, 1941 as cited in “Shaw on Stalin” (a pamphlet), The Russia Today Society, London, June 1941. 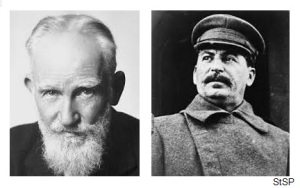 “We are told that among the Daghestan peoples the Sharia is of great importance. We have also been informed that the enemies of Soviet power are spreading rumours that it has banned the Sharia. I have been authorized by the Government of the Russian Socialist Federative Soviet Republic to state here that these rumours are false. The Government of Russia gives every people the full right to govern itself on the basis of its laws and customs. The Soviet Government considers that the Sharia, as common law, is as fully authorized as that of any other of the peoples inhabiting Russia. If the Daghestan people desire to preserve their laws and customs, they should be preserved”

“You [Albanians] are a separate people, just like the Persians and the Arabs, who have the same religion as the Turks. Your ancestors existed before the Romans and the Turks. Religion has nothing to do with nationality and statehood… Nevertheless, the question of religious beliefs must be kept well in mind, must be handled with great care, because the religious feelings of the people must not be offended. These feelings have been cultivated in the people for many centuries, and great patience is called for on this question, because the stand towards it is important for the compactness and unity of the people.”

The Muslim Religious Boards guided theoretically by the Koran, the Hadith and the maslahat / the interests of the believers to resolve questions of religious dogma. The decision / fatwa of a religious board on any religious question were brought to the knowledge of all Muslims over signature of the mufti of the Religious Board.

After the Second World War the most important Islamic establishment in the USSR was the Muslim Religious Board for Central Asia and Kazakhstan where 75 per cent of the Soviet Muslim lived. The Soviet Government depended on the Mufti of Tashkent for propagation of its views among the Sunni Muslims of the Islamic World…” 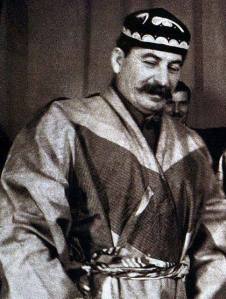 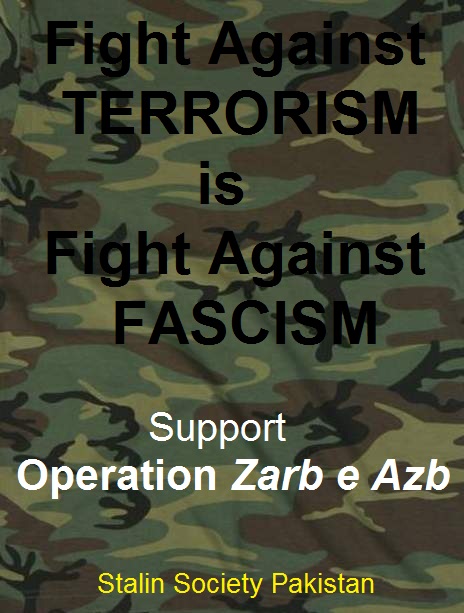 Toward a Progressive Pakistan 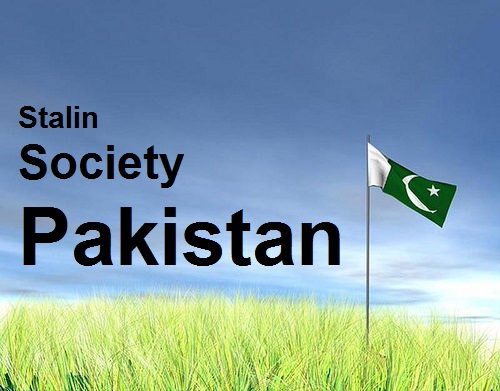 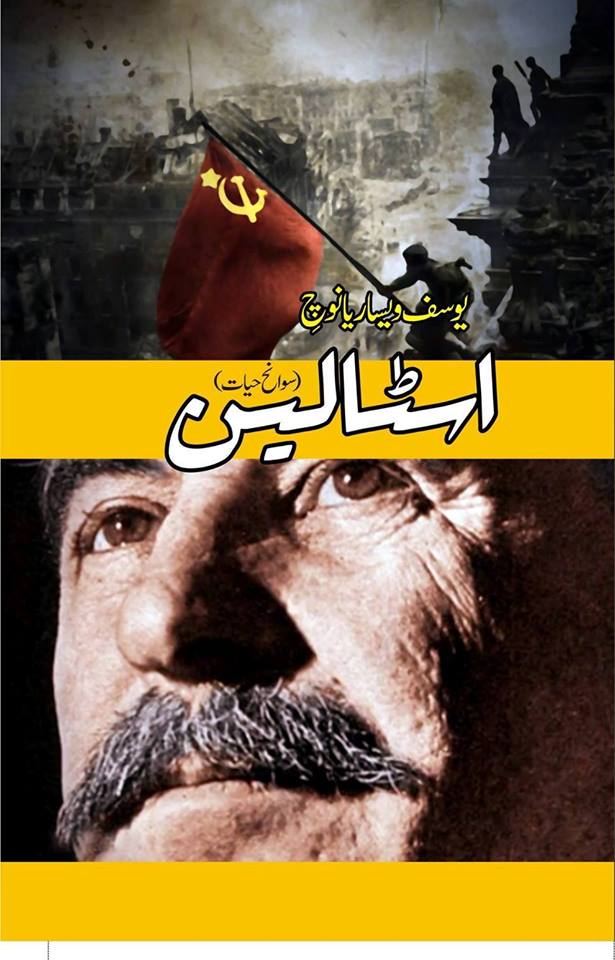